I have had the privilege of chairing the Industry Relations Conflict of Interest Committee at the Indiana University School of Medicine, the medical school where I work, over the past year.  I have learned a lot about interactions of academic physicians with industry, and have certainly heard differing opinions on the topic.  Our policies were recently approved (unanimously, I might add!) by all of the pertinent committees, and already, many faculty have had comments and questions about specifics of the policy.

One common theme that we have also heard is that “regulatory agencies and administrative bodies” have hurt the field of medicine.  I certainly understand the additional burdens of what it takes to practice medicine, and how those burdens can actually damage the patient-physician relationship.  However, when one looks at why conflict of interest policies are put in place, one needn’t look very far to see why it is necessary.

Here is a prime example.  The Journal of Patient Safety had to deal with this recent example with its own editor.  Dr. Charles Denham, the [now] former editor of the journal, failed to disclose his own financial conflicts of interest with organizations which paid him.  This impacted recommendations he made with respect to clinical guidelines that center around optimizing patient safety.

What is interesting to me is that sometimes, how one handles a scandal can be as important as the scandal itself.  Covering it up, hiding it, or trying to sweep it under the rug are all examples of ways that don’t work.  It is amazing that it is this same sense of “doing the right thing” that parents try to teach their children.  What impressed me in this example is how the journal chose to address this.  The journal has opted to tighten its own policies and processes around conflict of interest, for authors, editors and others who make decisions about articles within the journal.  They even published an article describing what they plan to do.

I applaud Dr. Albert Wu, Dr. David Bates and the journal editors for demonstrating the right way to manage this situation.  I think this is a great learning experience for the patient safety movement, for editors, and for all physicians who interact with industry.  Conflicts of interest are complex, but it all comes back to the fact that there is a public trust that must be put front and center.  If we violate that trust, then we have done a disservice to the profession, to ourselves, and, most importantly, to our patients.
Posted by Alex Djuricich at 3:56 PM No comments:

I have to hand it to cardiologists: for years they have created the most innovative and fun names for trials that are conducted.  As a generalist, I still remember the DIG trial from way back when, or the RALES trial, sometimes referencing names of trials when discussed medications for common conditions such as heart failure.  As therapy evolves, we get a PARADIGM-HF shift, some might say!

Today, I was sent a tweet about a fascinating trial, the “Intention to Tweet” trial (hats off again to our cardiology colleagues: TNOTY (Trial Name of the Year).  This trial was a randomized trial of social media to see the impact of social media on views of articles within one journal, Circulation.  In the intervention group, they tweeted out links to half of the articles, and a link to the Facebook page.  In the control group, no tweets were sent.  Kudos to Lee Aase for a wonderful review of what was done in the study, and what it might mean for the future.

Essentially, what the authors found was that there was no difference in clicks between the articles which had tweets sent/Facebook page links, and those which did not.  Some might refer to this as a “negative trial”.  I think that, in medicine, we need to see results of “negative trials” that show something was ineffective or not better than “usual care”, just like we need to see results that demonstrate a positive effect of an intervention.

But here is the clincher for this: I have seen several tweets from physicians and other scientists who are meaningful users of social media who are questioning the results or the design of the trial.  Some might interpret this as a “defeat” for social media.

Looking on the Altmetrics page for this particular article, however, paints a different picture.  Recall that this article was announced and sent out TODAY (11/19/14) as an early release article.  The Altmetrics description for this article puts it at the 92nd percentile of all articles within this Circulation journal.  It is in the 94th percentile for all articles of a similar age.  94th percentile!  That is pretty awesome!  Compared with other articles of a similar age in this journal Circulation, it ranks 2nd, in the 85th percentile.  Again, this article came out TODAY.

So here is the kicker.  This article on social media, based on these Altmetrics data, has “gone viral” on social media (at least compared with other articles from this same journal), and is ranked quite favorably in one metric used to gauge social media impact (that metric being “Altmetrics”).  I think that suggests exactly the opposite of what the conclusion did (meaning that dissemination of THIS ARTICLE via social media made it quite a favorable article), which could be interpreted as "social media does have an impact on readership of journal articles.  See this screenshot from Altmetrics from 10:30 pm EST on 11/19/14. 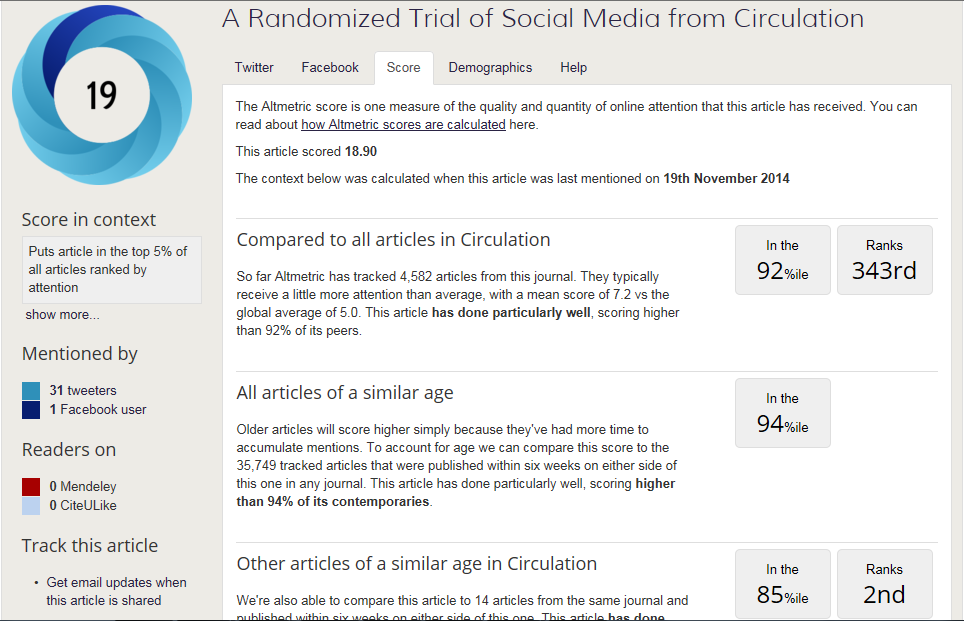 I applaud the authors for developing such a trial and Circulation for having social media editors in the first place.  Those of us who “believe” in the power of social media to teach, to learn and to advocate appreciate the scientific principles which went into creating this trial.  I do agree with one sentence in the conclusion that “further research is necessary to understand and quantify the ways in which social media can increase the impact of research”.

This article is a wonderful first step towards understanding these concepts, and provides a meaningful way to understand how to consider the impact.  As a social media editor for a journal myself (JCEHP), I plan to reference this article and use it in descriptions of how social media can impact journals, and ultimately, patient health and outcomes.
Posted by Alex Djuricich at 7:59 PM 3 comments:

So I've been in Chicago for the past few days at the inaugural Association of American Medical Colleges (AAMC) Medical Education meeting and the Society for Academic CME (SACME) meeting.  What a showcase of incredible learning opportunities!  Here are just a few of my take home thoughts and reflections from the past few days.

1. Healthcare in the U.S. has real problems, and medical education can really contribute to fixing this. We need to start calling ourselves healthcare learning systems. Medical education matters!

2. Getting one's message out to others (whether in the form of an abstract for a future presentation, or in a manuscript for a peer-reviewed publication) means that one has to be mindful of words.  Words matter!

3. Technology can be used to improve communication and healthcare, but we must be careful that technology in and of itself is not a solution.  People matter!

4. Seeing old friends and meeting new people create a wonderful community of learners, and together we can tackle problems better as a group than as individuals. Connections matter!

I still have another day of learning here, and lots more people to meet!  Thank you to the organizers for a wonderful meeting!

[for the record, I wrote and posted this piece while on the "L" headed to the meeting]
Posted by Alex Djuricich at 4:49 AM 2 comments:

Alex Djuricich
I am the Education Editor for the NEJM Group in Boston, privileged to work in medical education, advancing how physicians and other health care professionals learn, in order to improve the lives of patients for whom they care. I blog about topics related to medical education.